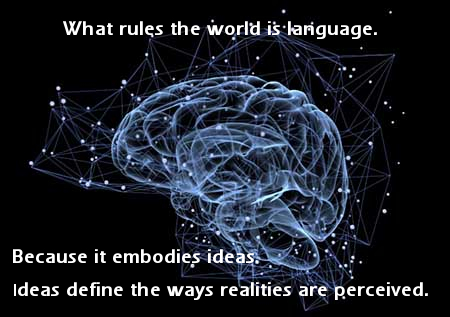 How realities, perceptions and relationships depend on the tool of definition by language.

At university I once heard a talk about neuroscientific history. It’s been a long time ago and although I still remember it was an interdisciplinary research colloquium that concluded a term, I have forgotten the name of the lecturer and the title of his speech. Anyways, the guest lecturer talked about a simple table. I recall him stating that the table was a table not because of any inherent attribute, but because we saw it as a table. Now be that as it may – the real question for me was: what made that table matter for me, for us, for everybody in that room? And would it still be a part of the world if no one saw it? I think not. Existence does not equal reality. The English word reality stems from the Latin word res (a thing, something materialized and perceived) after all. And realities are, in truth, mere perceptions.

The world we live in is not the same as the world. END_OF_DOCUMENT_TOKEN_TO_BE_REPLACED

Fresh out of Steph's mind...and into your reading list :)